Tim Pipp’s (founder of Beeze Tees Screen Printing) landlord in college was shocked when he stepped down his basement stairs to do some maintenance and laid his eyes on what was a full-blown screen printing business unannounced to him.

He had given Pipp permission to do some screen printing in the basement of his residence he was renting but was unaware as to the extent of the operation the young Kenne State College senior had been organizing.

“I talked to my landlord and I said hey, I’ve got this little hobby that I’d like to do and asked if he would mind if I did it in the basement of the house,” Pipp said. “He said no worries. About six months later, he came down to change an air filter or something like that and he called me up and said holy crap, this isn’t a hobby. This is like a full-on operation. I had boxes stacked all over the basement and I had ink everywhere. He let me do it, though. He was really cool about it.”

Fast forward 11 years later and Pipp is now the proud owner of Beeze Tees Screen Printing with locations in both Keene, New Hampshire, and Manchester, New Hampshire. Every step of the way, Pipp has found great success. 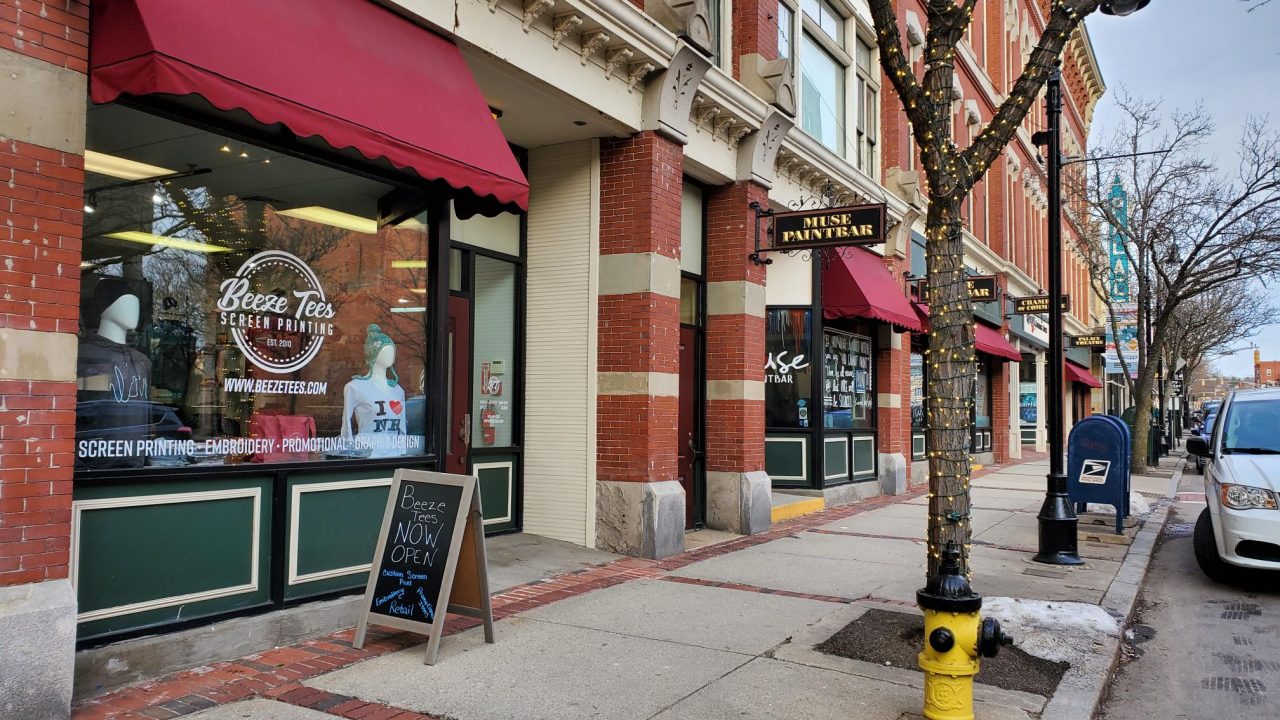 Pipp is the sole proprietor after starting the business with little to no help. Some initial guidance from his college cross country and track coach and a willingness to become an entrepreneur was all he needed to get the ball rolling in August of 2010.

“I guess the final straw was going into my senior year. I ordered T-Shirts from a local company and they screwed them up,” Pipp said. “They argued that they didn’t screw them up. They were crooked on the shirt, they were way overpriced and when we brought it to them, they said they weren’t crooked. That pushed me to recognize that there was a need in our community for it.”

After watching some YouTube videos and buying a couple of books, Pipp stretched his first screen on an old painting canvas frame that he had laying around from a college art class.

He made 10 shirts the first time he printed that said, “I have more miles than your car” which was a joke he and the running community would make. After selling all 10 shirts, Pipp started taking orders.

By his final semester of college, Pipp was down to just two college classes and was running his screen printing business full-time.

“A lot of my business early on was just kind of hustling,” Pipp said. “When I wasn’t running or in school, I was printing.”

Pipp was printing from his landlord’s basement, surrounded by dark, cold concrete walls and all of the equipment and supplies he could manage to get his operation up and running. 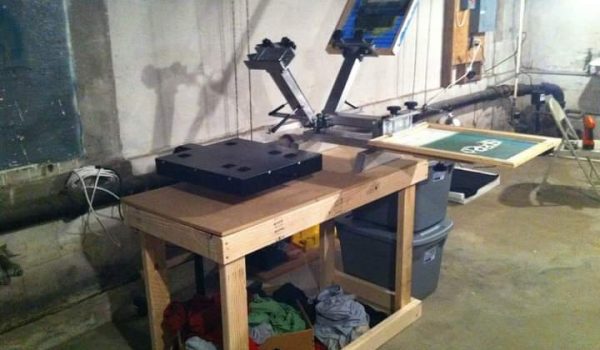 “My first press I made out of 2×4’s and plywood,” Pipp said. “A few months later I ended up buying a one-station, four-color. A couple of months after that I ended up buying a storage locker full of old screen printing equipment. That’s kind of really where I was able to move up and really start doing some more volume and maybe higher quality. Tougher prints, multicolor.”

Pipp’s introduction to embroidery is a story he likes to tell often. 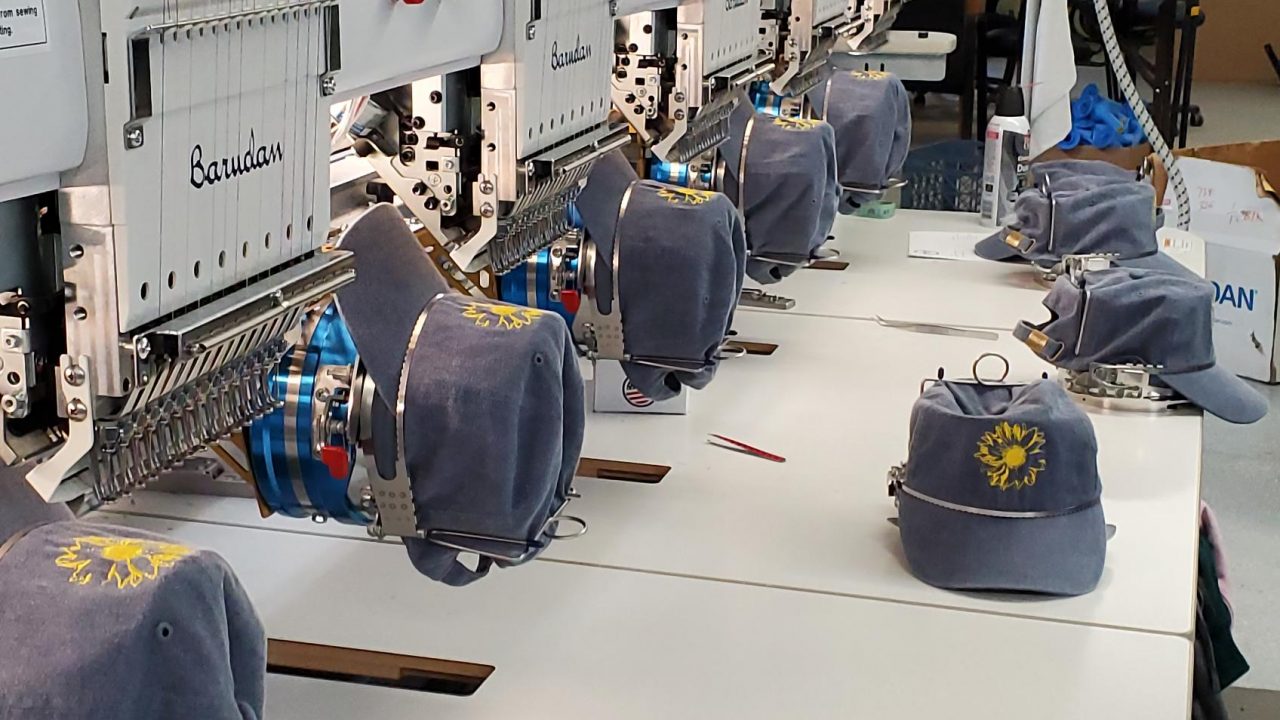 Pipp’s introduction to embroidery is a story he likes to tell often.

“It was probably around six months into the business that I got a phone call from a person and I had no idea how they had even heard of me. This woman was looking to get some sweatshirts and then some embroidery. I said I don’t do embroidery. She told me OK and thanked me anyway and told me that she would go to someone that does. I said, ‘oh wait, did you say embroidery?’ She said yeah and I said, ‘oh, I do embroidery. Sorry, I misunderstood you.’ So from that moment on, I started doing embroidery.”

For the first 2-3 years, Pipp was outsourcing all of his embroidery orders. After becoming increasingly tired of having no control over price, timing, and quality, Pipp decided it was time to buy an embroidery machine of his own.

“It got to the point where I was getting a three or four-week turnaround,” Pipp said. “So I ended up buying a single-head embroidery machine and hired somebody to run it.”

After spending the first few years running his business from a relatively small warehouse space with zero curbside appeal, Pipp began looking for a storefront in Keene in 2013.

“We moved to Mainstreet in Keene and the next year I doubled our sales,” Pipp said. “I knew that I had something.” 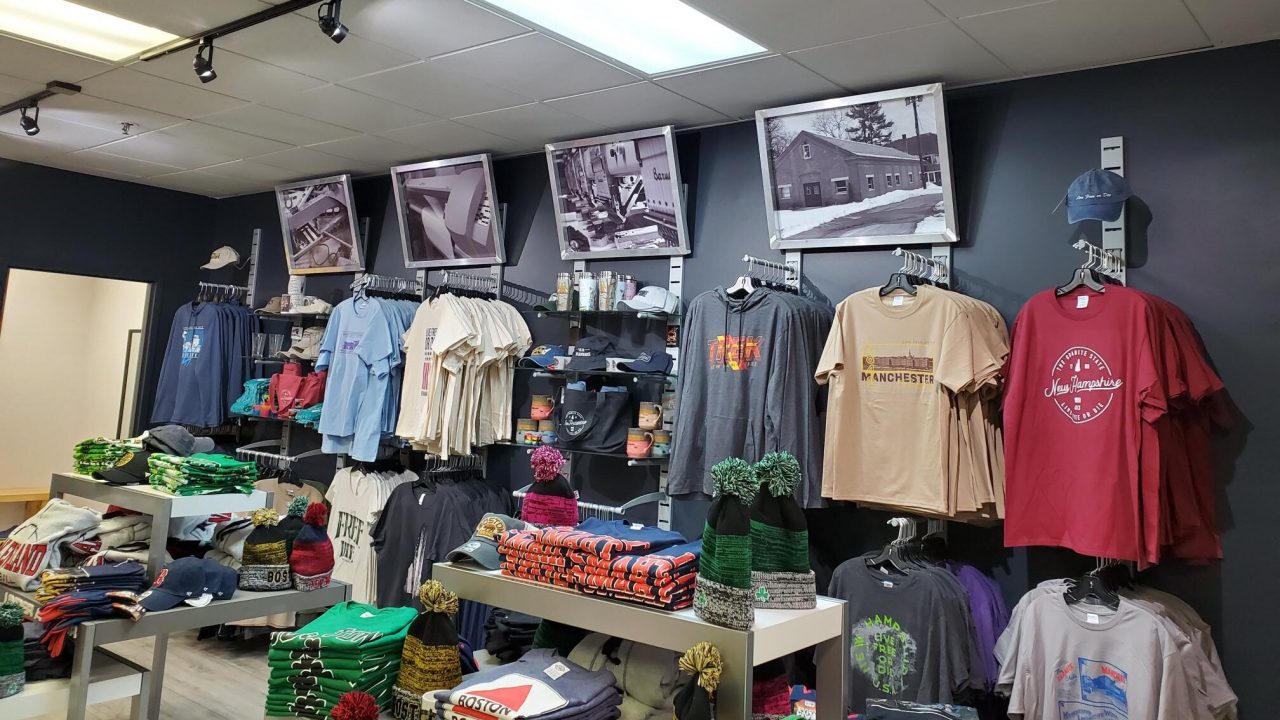 In 2016, Pipp was on the lookout for a warehouse to move his production too.

With all of their production now done in a warehouse, Pipp downsized his storefront slightly and moved right across the street in 2017. Beeze Tees Screen Printing has been a fixture at that location in Keene ever since. 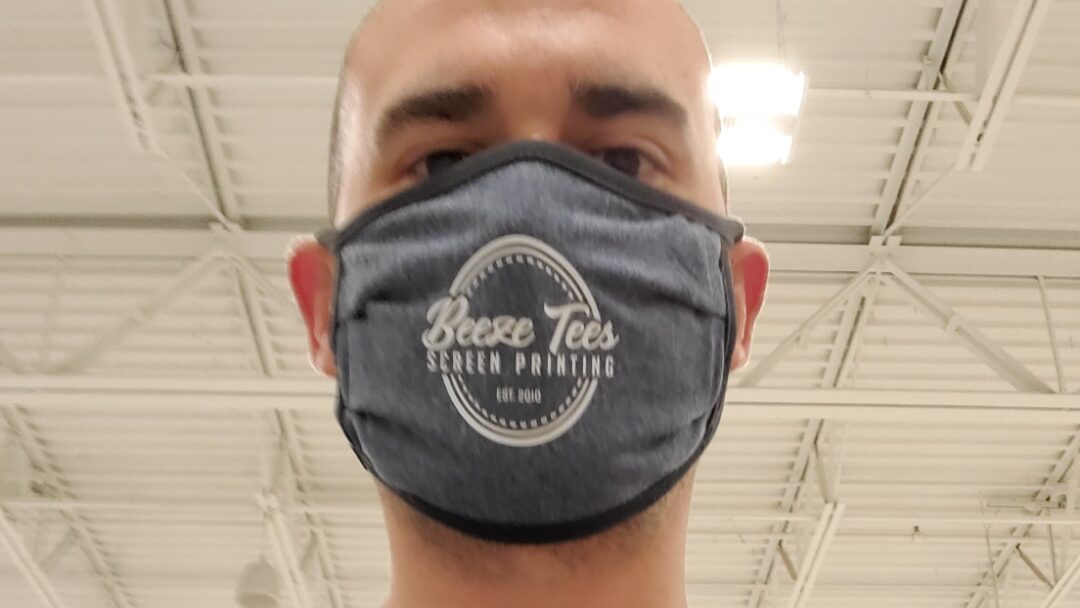 In 2020, just before the COVID-19 Pandemic took the globe by storm, Pipp had signed the lease on a second storefront in nearby Manchester, New Hampshire, the largest city by population in the state.

“Going into a second location, I had to sit down with my wife, which I’ve never had to do, and say, I think this is a good idea and this is why,” Pipp said. “It’s going to be stressful and it’s going to cost money, but in 3-5 years, this could be the store that does better than our original store.”

Pipp opened up the second store just before COVID-19 arrived. Like a lot of business owners across the world, he was forced to close the doors during the shutdown. Fortunately for the business, Pipp has since been able to re-open the doors to both storefronts.

The first half of 2020 was spent in large part creating masks for the business, an idea Pipp came up with after it was announced that masks would help stop the spread of the virus. He was able to create a website through DecoNetwork and later outsourced the production for the most part while producing what he could in-house.

Pipp and his business were able to generate enough income from it to keep several of his employees employed, on top of their normal screen printing and embroidery business, a venture he was proud to be a part of. 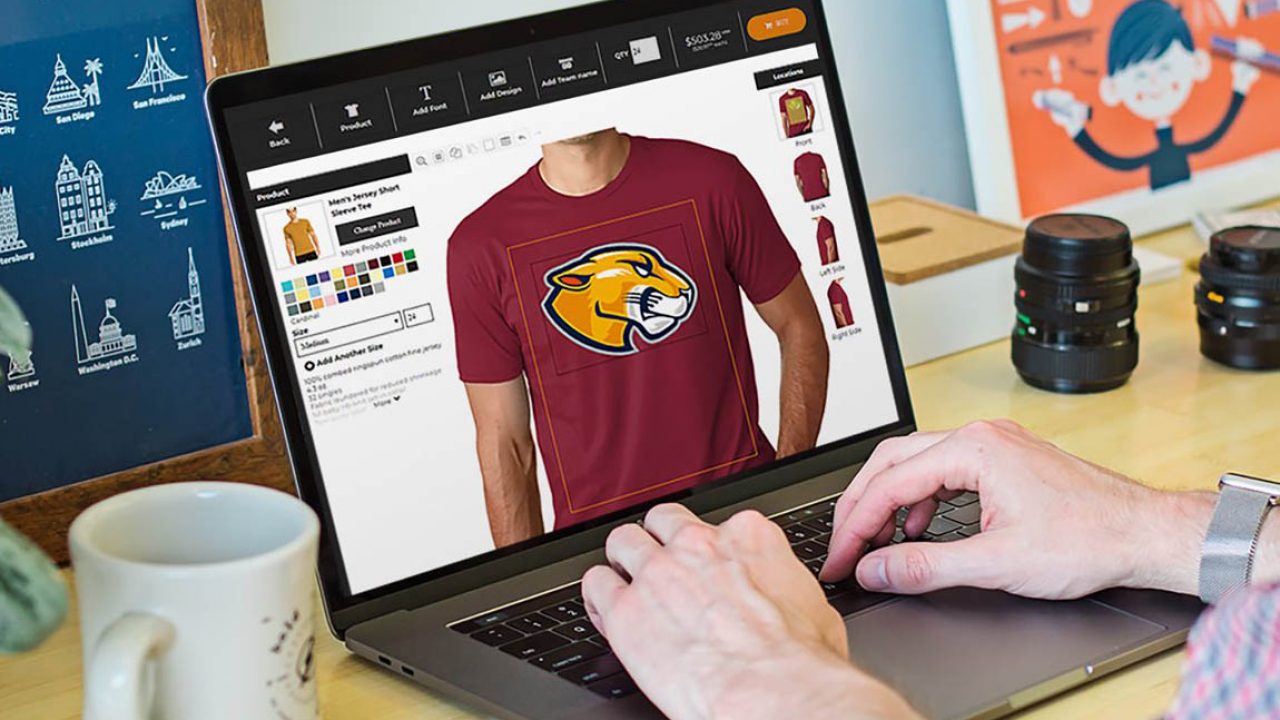 Pipp and Beeze Tees Screen Printing have been a valued customer of DecoNetwork since 2015 which provides them with E-Commerce and shop management software to run their day-to-day operations.

“I went into the T-Shirt forums and looked up all the different software,” Pipp said. “I ruled out certain things and DecoNetwork was the one that fit best for us.

Pipp said that having DecoNetwork made the process of opening up a second storefront super easy. Pipp and his team created the Manchester location its own web store through DecoNetwork and have been smooth sailing ever since.

“There are components of DecoNetwork that are just different than every other software,” Pipp said. “I still think the web stores are way better than anything anyone else is doing and I think the invoicing and catalogs are great. I personally love the campaigns and I like the way the campaigns run, as well as liking how with DecoNetwork that we can change it however we want and I can go in and do a lot of stuff to it. There are a lot of things that I like about (DecoNetwork) and a lot of reasons why I wouldn’t change.”

Pipp said the future of Beeze Tees Screen Printing is bright. While he and the company are still feeling the effects of COVID-19, much like every business, Pipp said he hopes to finish the year strong and continue to grow and expand. A third storefront location down the road is already in their crosshairs within the next few years.

Get Started With DecoNetwork

This website uses cookies to improve your experience while you navigate through the website. Out of these, the cookies that are categorized as necessary are stored on your browser as they are essential for the working of basic functionalities of the website. We also use third-party cookies that help us analyze and understand how you use this website. These cookies will be stored in your browser only with your consent. You also have the option to opt-out of these cookies. But opting out of some of these cookies may affect your browsing experience.
Necessary Always Enabled
Necessary cookies are absolutely essential for the website to function properly. These cookies ensure basic functionalities and security features of the website, anonymously.
Functional
Functional cookies help to perform certain functionalities like sharing the content of the website on social media platforms, collect feedbacks, and other third-party features.
Performance
Performance cookies are used to understand and analyze the key performance indexes of the website which helps in delivering a better user experience for the visitors.
Analytics
Analytical cookies are used to understand how visitors interact with the website. These cookies help provide information on metrics the number of visitors, bounce rate, traffic source, etc.
Advertisement
Advertisement cookies are used to provide visitors with relevant ads and marketing campaigns. These cookies track visitors across websites and collect information to provide customized ads.
Others
Other uncategorized cookies are those that are being analyzed and have not been classified into a category as yet.
SAVE & ACCEPT
Powered by